The republic of Maldives is an island state located in the Indian Ocean in the south-east of India and it is composed by a group of atolls. The official language is Maldivian and the capital is Malè.

The archaeological finds found in the Maldives dates back to 1500 b.C. and this suggests that before that time the islands were uninhabited. Today’s population discends from the Buddhist population migrated from south of India and Sri Lanka around the IV and V century. Thanks to their strategic position, the Maldives became an important stopover point for Arab traders, who have had a strong cultural influence over the population and for this reason, starting from XI century, a gradual conversion to Islam had begun. In 1153, Maldives official became a Sultanate. Even today Maldives are a very religious country and from 2008 the Constitution established that ” a non-muslim cannot become a citizen of Maldives”. During the colonial period, the European began to threaten the Maldives. The first to conquer them were the Portuguese, who established a settlement in 1558. They were then driven out by the Arabs in 1572 and the Sultanate remained independent until 1887, when it became a British protectorate. During the second World War, the British navy took a big advantage on the strategic position of Maldives. In 1953, there was an attempt to establish a republican system, but it was not successful. In the 1960s, a separatist state was formed in the ‘United Republic of Suradiva’, which included the Suradiva, Addu and Gan atolls and other smaller islets. But already in 1963, it was reintegrated. Indipendence from Great Britain came in 1965, so as the entry in the ONU and in 1980 the Sultanate turned into a presidential republic. The president Maumoon Abdul Gayoom, who has ruled from 1878 to 2008, adopted a totalitarian policy, exerting strict control over information and almost nullifying opposition movements. There were two coups, in 1980 and in 1983, but both failed. In 1988, there was a coup, also of short time. In a 2003 report, Amnesty International denounced the human rights violations perpetrated by the Gayoom regime. In response, the president announced reforms of the judicial system and parliamentary powers. In 2004, a demonstration for the release of political prisoners was dispersed by law enforcement, but in 2008 the democratic party took the power and tried to start a process of modernization of the country. There were several reforms on freedom of expression, on the respect for human rights, on the prison system. One of the successes of the country’s first democratic government was, without doubt, the transformation of the Maldivian economy into the world’s first green economy: no use of fossil energy, but only clean energy based on wind, sun and small quantities of biodiesel. The environmental protection and biodiversity policies of the coral reef were also important.
When in 2012 there was talk of possible reforms that would abolish the pre-eminence of the Islamic religion in the constitution, supporters of the past regime, police forces and Islamic movements carried out a coup. In February 2012, the US recognized the coup government, led by Mohamed Waheed Hassan Manik. The current president is Abdulla Yameen Abdul Gaymoon, half brother of the former dictator, who won the election in the ballot in 2013. 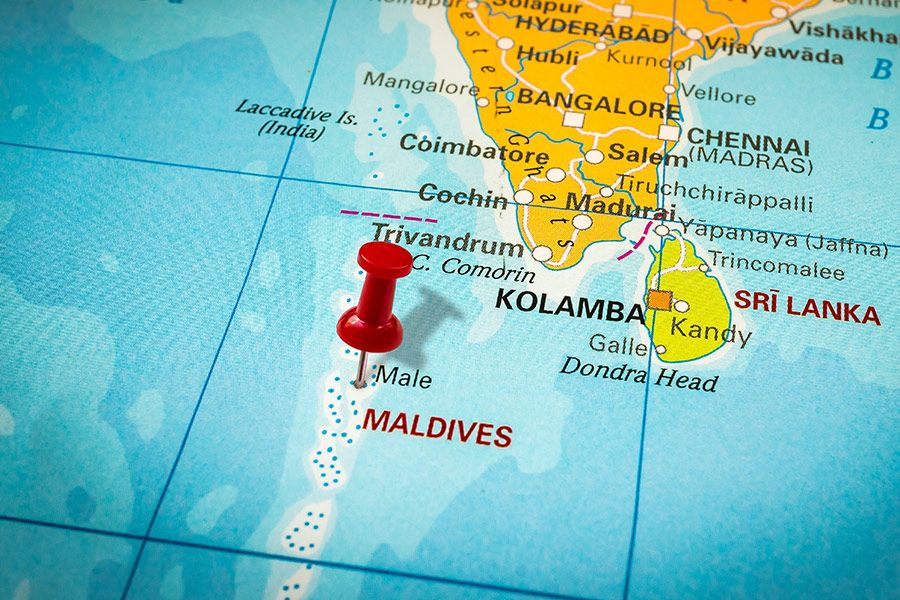 The journeys proposed by Conscious Journeys will give you the chance to visit these paradise islands and at the same time to have an ecological and eco-sustainable holiday. All the accomodations in Maldives islands follow eco-sustainable criteria, choosing low environmental impact solution. The four star Eco-resort that hosts the visitors respectsthe principles of cycle tourism, such as sustainability, conservation and involvement of local communities in their initiatives. The stays will take place on the island of Hanimaadhoo and here you will have the opportunity to discover the Maldivian culture and meet the local inhabitants. To the natural wonders that these islands have to offer, cultural activities that will make the trip truly unforgettable will be added. 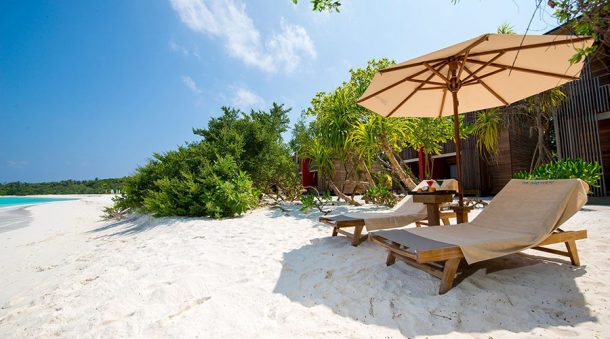 Maldives have changed and the luxury private islands are not the only solution anymore; now it is possible to offer sustainable Maldives to the ecological travelers. 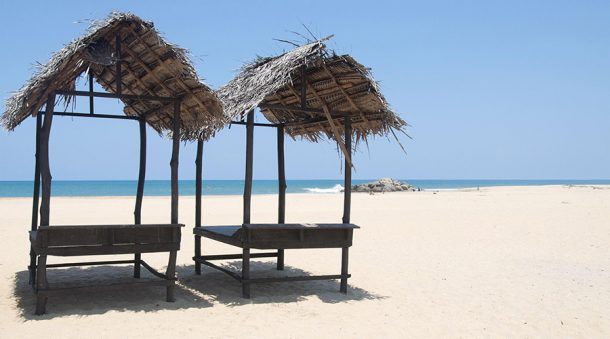 This tour will shows you the majestic nature, the rich culture and the wonderful Sri Lanka’s and Maldives’s beaches, for an unique journey. 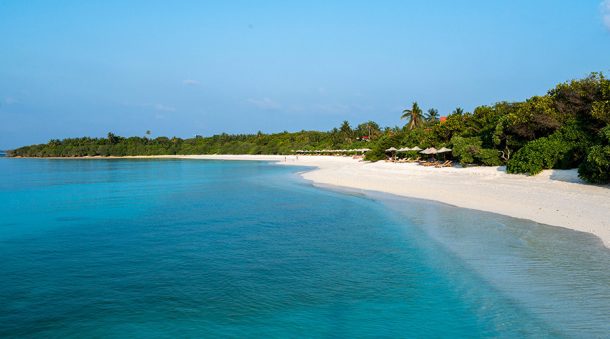 The itinerary is designed for an unforgettable journey to discover southern India, combined with one of the paradise islands of Maldives.

Malè: is the archipelago’s capital and one of the smallest in the world, being on an island of only 2 sq. km.
Despite its small size, the city hosts a quarter of the Maldives’s population. Unlike the other islands, in Malè you’ll find tall buildings and asphalted roads, offices and boutique. Here there are no beaches and it is often used only as a stopover, to then continue towards the smaller and wilder atolls.
Hanimaadhoo: paradise island in the north of Maldives, which also hosts one of the few domestic airports of the archipelago and a meteorological observatory.

The main ingredients are fish and rice, instead meat and chicken are only used in special occasions. The local drink is the raa, a sweet palm wine, and except for the coconut, a great part of fruits and vegetables are imported.
Mas huni: typical fish dish served for breakfast with white rice or with Roshi, unleavened bread similar to our wraps. It exists in different variations, but the inevitable ingredients are tuna, onion and coconut, often accompanied with peppers, tomatoes and a local aromatic plant, called Hikandhi.
Geri riha: very spicy dish with curry and beef, cooked with coconut milk.
Chichandaa satani: a very original dish made with snakeskin, onion, chili pepper, lemon juice and coconut milk.
Kandumahu mussanmaa: tuna dumplings wrapped in palm leaves and flavored with curry and coconut, a dish that combines the flavors of the ocean with the spicy taste so loved by Maldivians.
Kaliyaa Birinjee: typical dish in the fishermen’s houses, made with patna rise seasoned with onion, garlic and spices such as cinnamon, fennel seeds, ginger and cardamom.
Raiymahu riha: it is a very tasty and spicy snapper soup. Starting from a sauté of garlic, onion and curry, whole fish (including the head), coconut milk and water are then added. The resulting soup is fragrant and very tasty.
Theluli mas: typical tuna fish fry.
Kukulhu bis riha: single dish with a delicious exotic flavor. It is made with chicken, eggs, potatoes and coconut cream, all flavored with curry.

How to get
Passaporto: necessary with residual validity of at least 6 months. From January 2016, an electronic passport with a microprocessor is required.
Entry Visa: mandatory, it lasts 30 days and is granted directly at the airport upon entry into the country. It is possible to extend the visa for another 60 days, for a maximum duration of 90 days. It is necessary to complete a form and submit two passport photos to the local Immigration Office within 30 days from thearrival. If you travel without relying on a tour operator, a confirmed reservation is required at one of the hotel facilities.
International airport: Malè

Maldives Weather
The climate of the Maldives is tropical-monsoon with temperatures that range between 27 ° and 35 ° C. Archipelago is affected by two monsoons: one from the Southwest between May and October, which mainly affects the North; one from the North-East between November and April, which affects the central area. In these periods there are frequent rains. So the best time to visit these islands is from December to May.

Currency
Maldives Rufiyaa, the exchange rate is around 1euro = 18 Rufiyaa, but in all Maldives Resorts and in the major islands you can safely pay with the major international currencies and by credit card.

Travel Safe
Compulsory vaccinations: only vaccination against yellow fever is mandatory for all travelers over the age of one year who come from countries at risk or who have transited for more than 12 at airports in these countries.

In general, in the places frequented by tourists there are no endemic diseases and in the big hotels normal hygiene measures are adopted. The health facilities of Maldives are not comparable with the European ones and are inadequate in the event of emergences. Before travel, travelers are recommended to take out medical insurance that covers not only medical expenses, but also medical air repatriation or transfer to another country.

We also recommend to bring essential necessities with you; consume bottled or can water and drinks, avoiding the addition of ice, remembering that in tropical areas it is good to drink 3-4 liters of water a day to avoid the risk of dehydration; protect yourself with high-screen sunscreen and from insects with specific products.