We are a local Tour Operator based in Thimphu, the capital of Bhutan, and thanks to our experience we are the perfect partner to organize trips and assist and satisfy the customer in all his travel needs.
All itineraries are designed and developed by us to offer an authentic experience and enter the deep heart of Bhutanese culture.

Bhutan, officially the Kingdom of Bhutan, is a small mountain state in Asia close to the Himalayan chain and bordered to the north with Tibet (China) and to the south with India.

The capital of Bhutan is Thimphu, the official language is dzongkha. It is the only country to profess Mahayana Buddhism as official religion. In 2007 the absolute monarchy became constitutional and since 2008 the king of Bhutan is the young Jigme Khesar Namgyel Wangchuck, fifth Dragon King of the country. The precise meaning of Bhutan remains unknown, perhaps deriving from the Sanskrit Bhota-ant ‘the end of the Bhot’ – Bhot is one of the names of TIbet – or from the Sanskrit Bhu-uttan ‘high lands’. Throughout history many names have followed one another, Lho Pho Mon ‘southern land of darkness’, Lho Tsendenjong ‘southern land of the cypress’ and Lhomen Khazhi ‘southern land of the four access roads’, but the inhabitants call themselves Drukpa and their homeland Druk Yui, which means ‘land of the dragon’ or Druk Tsendhen ‘land of the dragon of thunder’.

Archaeological finds prove that Bhutan was already inhabited in 2000 b.C., although no such ancient written evidences exist. According to Bhutanese tradition, the history of the country began in the 7th century with the Tibetan king Songtsen Gampo. In the 8th century Guru RImpoche, a mystic revered as a second Buddha, came to Bhutan and spread the tantric form of Mahayana Buddhism, which still remains the most widespread religion in the country today. Until 1600 the country remained divided and governed by various noble families and clans; in 1616 the Tibetan monk Shabdrung Ngawang Namgyal unified the country, creating the administrative structure that still exists today in some institutions. In 1627 the first Europeans, Portuguese Jesuits, explored the country. After the death of the monk Shabdrung Ngawang Ngawang Namgyal, internal conflicts and civil wars tore the country apart for about two centuries, the local rulers took power and became independent from the central government. In 1827 a fire ravaged Punakha, the capital at that time, and most of the records and written testimonies about the country’s history were lost. What is clear is how much religion has always influenced Buthan’s history and institutions. In 1865 Bhutan and the United Kingdom signed the Sinchulu Treaty, which guaranteed Bhutan annual subsidies in exchange for the transfer of certain border territories.

In 1907 the monarchy was established and the first king was Ugyen Wangchuck, while from 2010 a new agreement excluded the United Kingdom from the internal affairs of the country, leaving the British government to manage foreign affairs. This role then passed to India in 1947. In 1949 the territories ceded to the British were returned to Bhutan, the annual grant was formalized and India’s responsibilities for the defence and international relations of the small state were defined. The father of the present king, Jigme Singye Wangchuck, ascended the throne in 1972, at only 17 years of age, with the title ‘Druk Gyalpo’ or Dragon King. His innovative ideas led the country to a gradual modernization. Important were the efforts to preserve and standardize the culture in the country, but they caused problems of coexistence with the community of Nepalese origin. He was the first to speak of ‘gross domestic happiness’, which was more important to him than gross domestic product. In 2005, the king announced that he would abdicate in favour of his son, who was crowned in 2008 with a ceremony attended by a third of the population of Bhutan.

In Bhutan we offer several responsible tourism itineraries that have been created with the aim of benefiting local communities.

All trips in Bhutan include obligatory stops in major cities, such as Thimphu and Paro, and in the most significant and beautiful temples of Bhutan, including the famous Taktsang Monastery, called “the Tiger’s Lair”, because tradition has it that in this place Guru Rimpoche took shelter on the back of a flying tiger, in the seventh century, during his pilgrimage to Tibet to spread the Buddhist teachings.

Bhutan, despite its small size, is the home of many indigenous cultures and ethnic groups, as evidenced by the 19 dialects present in the country. The government and the communities are very attentive to the protection of the local environment and culture. There will be special visits to realities that work for the protection of these local cultures and traditions. The Bhutan trip will impress you with its wonderful charm. 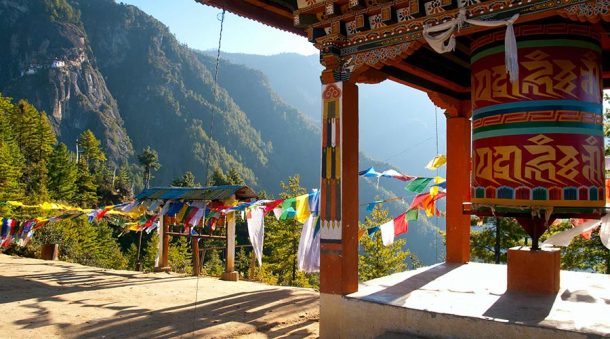 BHUTAN THE LAND OF THE THUNDER DRAGON
Duration: 12 days

This itinerary has been organized to visit the sacred places of the kingdom of Bhutan, and you will experience its deep culture and religiosity. 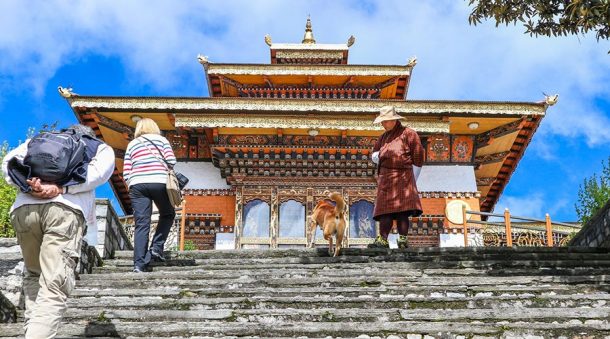 THE ESSENCE OF BHUTAN
Duration: 8 days

This itinerary was designed to make you experience the most fascinating and important places of Bhutan with an 8-days trip. 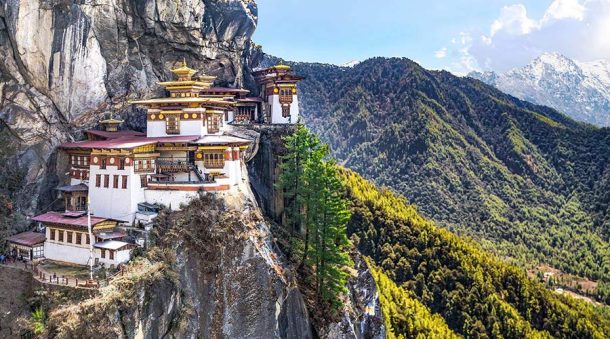 This itinerary was designed to visit the places of Sikkim and Bhutan that have had been consacrated from Guru Rinphoche, during his trip to India.

Thimphu — It is the capital of Bhutan and with its 50,000 inhabitants is also the most populated city. Thanks to recent urbanization it has expanded a lot, with the reconstruction of the center and the suburbs. By law all buildings must be decorated in the traditional style, with religious motifs. All unauthorized buildings are demolished. Tashichoedzong, a fortified temple, has been the seat of government since 1952. The monasteries of Dechenphu, Tango and Cheri and the palace of Dechenchoeling, the King’s official residence, are also located in the north of the city. At the end of the summer at Tashichoedzong a mask dancing festival attracts many tourists.

Paro — Thanks to its excellent location it is the largest shopping center in the country, also served by Bhutan’s only international airport. Here are also the most beautiful temples of the country, among which there is the famous Taktsang Monastery, also called Tiger’s Lair, nestled in the Himalayan chain.

Phuentsholing — Its position as a border town, well connected by railways and roads to many Indian cities, has favoured its economy, so much so that it is the seat of the Bank of Bhutan.

Punakha — It is the ancient capital of the kingdom of Bhutan, characterized by a warm tropical climate that has made it the favorite destination of the royal family during the winter season. Since ancient times it has been an important commercial centre and today it also hosts a national airport. The dzong of the city is considered one of the most beautiful in Bhutan and is certainly the most important from a historical point of view. It was built between 1637 and 1638 at the confluence of the Pho Chhu and Mo Chhu rivers. Every year in February the Punakha Festival takes place, in which the spiritual leader of Bhutan, Je Khenpo, also participates. It is one of the most important events in the country and takes place in two periods: the Domchen, which lasts 5 days and is a historical commemoration of the resistance to the Tibetan army invasion, and the Tsechu, during which all the masks of the religious tradition parade.

Trongsa — It is the ancient capital of the kingdom of Bhutan, characterized by a warm tropical climate that has made it the favorite destination of the royal family during the winter season. Since ancient times it has been an important commercial centre and today it also hosts a national airport. The dzong of the city is considered one of the most beautiful in Bhutan and is certainly the most important from a historical point of view. It was built between 1637 and 1638 at the confluence of the Pho Chhu and Mo Chhu rivers. Every year in February the Punakha Festival takes place, in which the spiritual leader of Bhutan, Je Khenpo, also participates. It is one of the most important events in the country and takes place in two periods: the Domchen, which lasts 5 days and is a historical commemoration of the resistance to the Tibetan army invasion, and the Tsechu, during which all the masks of the religious tradition parade.

In Bhutan the trip is also interesting from a culinary point of view, and the most important foods are red rice, wheat, corn, pork, beef, chicken, yak, cheese and chili. Soups and stews of dehydrated meat and vegetables seasoned with spices and cheese are typical preparations. Yak milk dairy products are also very popular.

Ema datshi – a spicy dish made of big green peppers and chili peppers, in a cheese sauce, is found throughout the country and is considered a national pride.

How to get here
Passport: necessary, with subsequent validity of at least six months and in any case always beyond the expiration of the stay in Bhutan.
Entry Visa: it is compulsory. It is issued with an authorization from the capital Thimphu according to precise procedures: anyone wishing to travel to the country must contact the Tourism Council of Bhutan (Website www.tourism.gov.bt , e-mail info@tourism.gov.bt) and book the stay only with Tour Operators recognized by that organization. There is a list of Tour Operators authorized by the Government of Bhutan available at the following link: http://www.tourism.gov.bt/directory/tour-operator. The visa costs USD 250 per day, including accommodation, meals, internal transport, local guides and possible artistic and cultural events. During the low season (December-February and June-August) the required expense is reduced to 200 USD per day. Individual travellers in groups of less than 3 people may be required to pay a higher deposit, while there are facilitations for students and minors.
An entry visa fee of USD 40 is required to be paid by bank transfer or through authorized travel agencies.
It is advisable to always inquire in advance at the Embassy or Consulate of the country present in Italy or at your travel agency.

Bhutan climate
You can visit Bhutan all year round, but the best periods are from March to May (spring) and from mid-September to mid-November (autumn).

Bhutan Safe Travel
Mandatory vaccinations: for all travellers over 1 year of age from countries at risk of yellow fever transmission, the vaccine against this disease is mandatory. It is also compulsory for those who have been in transit for more than 12 hours at airports in countries at risk of transmitting the disease.
Warnings: It is advisable to consult your doctor or the vaccination centre to decide whether to vaccinate against meningitis, rabies, tbc, cholera, typhoid, hepatitis A; it is preferable to drink water that has been boiled or purified or to drink water or open bottled drinks in the presence of the consumer, avoiding the addition of ice; avoid eating raw food.
If you decide to go hiking in high mountain areas, it is advisable to pay attention to “Acute Mountain Sickness” (AMS), a pathological condition caused by the body’s failure to adapt to high altitudes that can cause hypoxia.
In addition, it is recommended to take out, before departure, a health insurance that includes not only the coverage of medical expenses, but also the possible repatriation by air or transfer to another country.