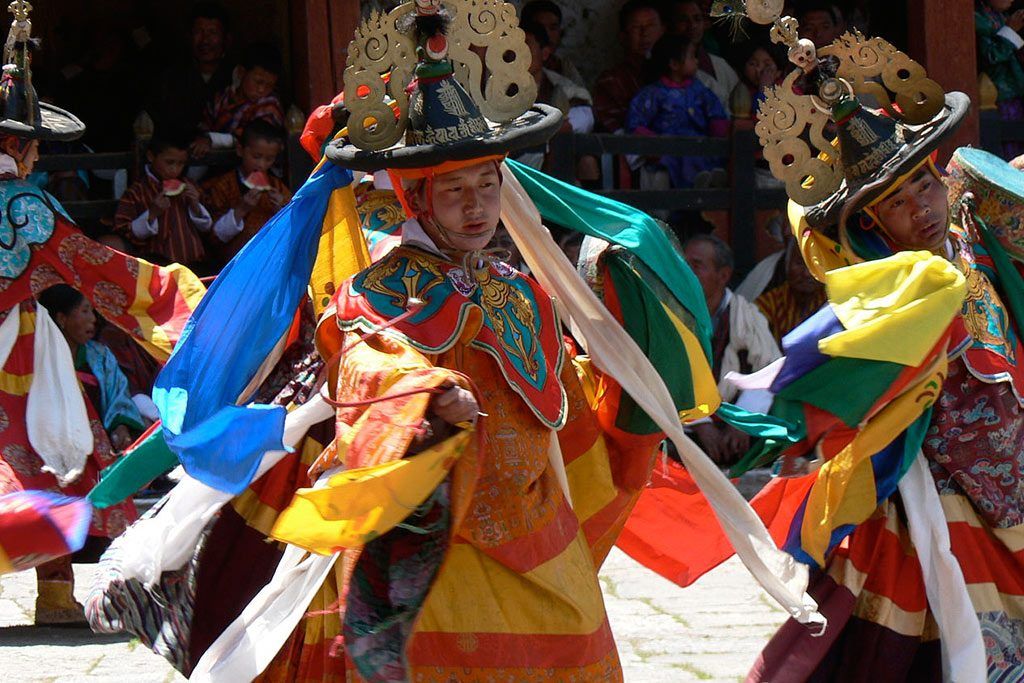 The Tshechu is a religious event celebrated on tenth day of a month of the lunar calendar corresponding to the birthday of Guru Rimpoche (Guru Padmasambhava). However the exact month of the Tshechu varies from place to place and temple to temple. The Tse+chu is a festival in honour of Padmasambava – “one who was born from a Lotus flower”, popularly known as “Guru Rinpoche”, the precious Teacher. This saint contributed enormously to the diffusion of Tantric Buddhism in the Himalayan regions of Tibet, Nepal, Bhutan etc. around 800 A.D. The Tsehchu is considered a major attraction and people travel from neighbouring districts to participate in the festivity. Early in the morning on the last day of the celebration the monks display a gigantic thangkha (embroidered painting) , the Guru Throngdel, inside the dzong. Thongdrols are especially impressive examples of Buddhist art and never fail to amaze viewers. They are considered so sacred that simply seeing a Thongdrol is said to cleanse the viewer of sin. Tshechus are grand events where entire communities come together to witness religious mask dances, receive blessings and socialize. In addition to the mask dances tshechus also include colourful Bhutanese dances and other forms of entertainment. It is believed that everyone must attend a Tshechu and witness the mask dances at least once to in order to receive blessings and wash away their sins. Every mask dance performed during a Tshechu has a special meaning or a story behind it and many are based on stories and incidents from as long ago as the 8th century, during the life of Guru Padmasambhava. In monasteries the mask dances are performed by monks and in remote villages they are performed jointly by monks and village men. Two of the most popular Tshechus in the country are the Paro and Thimphu Tshechus in terms of participation and audience. Besides the locals many tourists from across the world are attracted to these unique, colourful and exciting displays of traditional culture. The Paro Tshechu is held every spring and is one of the most colorful and significant events in Paro Dzongkhag (district).

See our departure for Paro Tshechu in Sikkim & Bhutan