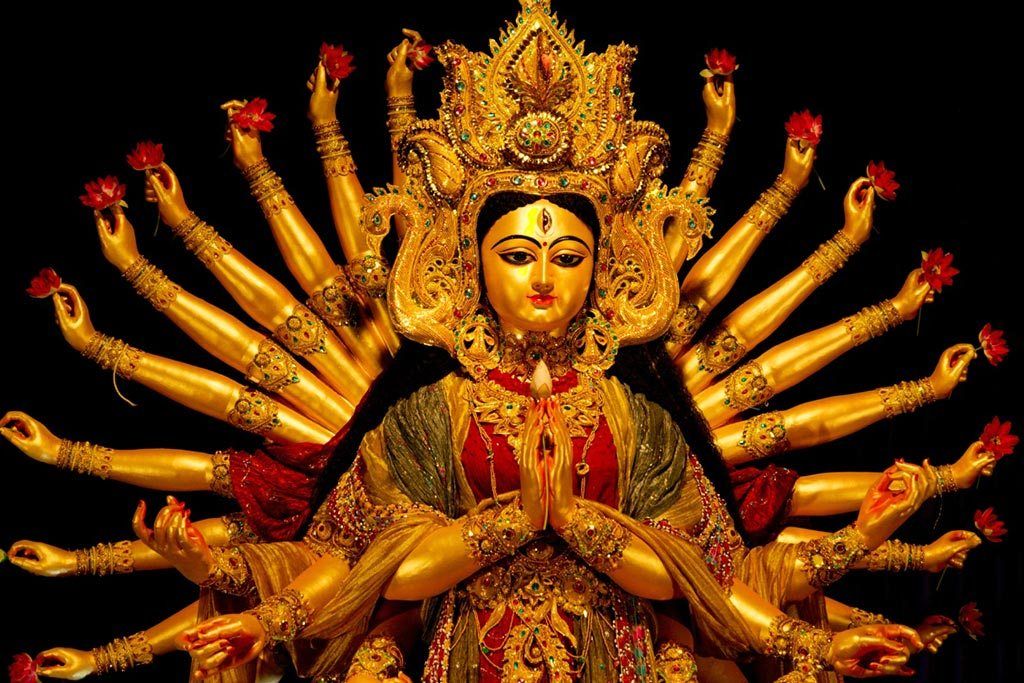 Navaratri is celebrated for nine consecutive nights in praise of Lord Rama (hero of the epic Ramayana) and Goddess Durga. Continuous chanting from the great epic ‘Ramayana’, along with evening performances from the episodes of his life (Popularly known as Ramleel ) are held for nine days. The tenth day after Navratri is called Dussehra, on which number of fairs are organized throughout northern India, burning effigies of Ravana, his son Meghnad and Kumbhakarna to symbolize the burning of the evil within ourselves and thus follow the path of truth and goodness. According to the Puranas, on this day Godess Durga defeated the Demon Mahishasura. The fight continued for Nine days and nights (navaratri) and on the tenth, Mahishasura was killed thus establishing the triumph of good over evil. The most joyous celebration of Navaratri is seen in North India and especially in West Bengal. During the last days of the Navaratri is celebrated Durga Puja. This special Puja, especially in Kolkata, West Bengal, is not just of religious relevance, but also holds the reputation of the biggest social and cultural event. It predominantly appeals bengalis for ten days to socialize in huge way, and meet their close ones not only to gift them, but also to solicit for their everlasting happiness. The gala festivities include the last four days, starting from Maha-Shashti (the sixth day) until the idols are immersed into the waters of the Hooghly River on the evening of Dashami. Thousands of clay idols of the ten-armed goddess Durga clutter the streets of Kolkata in long processions amongst much general singing, dancing and firework explosions. Further, colourful activities include singing, dancing and mouth-watering traditional Bengali sweets, along with household decorations and buying trendy outfits, appealing accessories, street stalls blossom all over Kolkata city, which dazzles with the festive lights during this festival.

See our departure for Navaratri & Durga Puja in The Holy Ganges