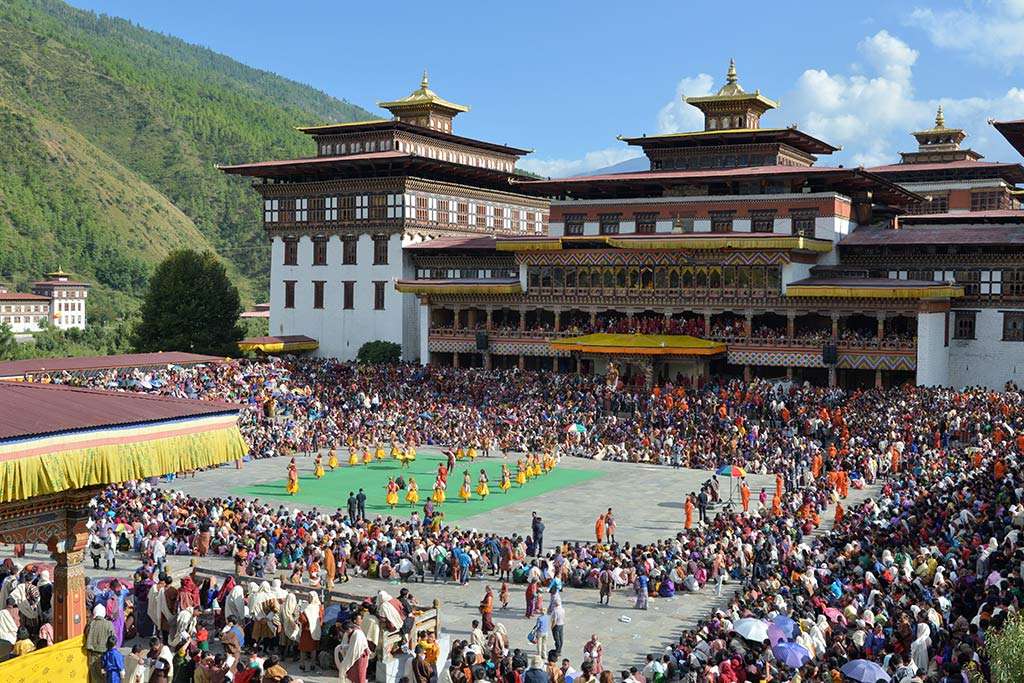 One of the biggest festivals in the Bhutan is the Thimphu Tshechu. This festival is held in the capital city for three days beginning on 10th day of the 8th month of lunar calendar. The Thimphu Tsechu was established by the 4th Temporal Ruler, Tenzing Rabgye (1638-1696) in 1670 on the 8th month of Bhutanese calendar to commemorate the birth of Guru Rinpoche. It is held on the courtyard of the Tashichhodzong and is considered one of the most beautiful Tshechus in western Bhutan. This Tshechu is witnessed by thousands of people many of which travel from neighboring Dzongkhags (districts) to attend the festivities. The actual Tshechu is preceded by days and nights of prayer and rituals to invoke the gods. The Tsechu is a religious festival and by attending it, it is believed one gains merits. It is also a yearly social gathering where the people gather to rejoice, dressed in finery. In order that Bhutan can rejoice in continued happiness, many learned lamas established the tradition of these dances. The deities of the Tantric teaching are invoked during these dances. Through their power and benediction, all misfortunes are annihilated, and peace and happiness reign. When it was initiated by the 4th Desi, Gyalse Tenzin Rabgay in 1867 the Tshechu consisted of only a few dances being performed strictly by monks. These were the Zhana chham and the Zhana Nga chham (Dances of the 21 Black Hats), Durdag (Dance of the Lords of the Cremation Ground), and the Tungam chham (Dance of the Terrifying Deities). The Thimphu Tshechu underwent a change in the 1950s, when the third King Jigme Dorji Wangchuck, introduced numerous Boed chhams (mask dances performed by lay monks). These additions added colour and variation to the festival without compromising its spiritual significance. Mask dances like the Guru Tshengye (Eight Manifestations of Guru), Shaw Shachi (Dance of the Stags) are enjoyed because they are similar to stage-theater. Equally important are the Atsaras, who are more than just mere clowns. The Atsaras are the dupthobs (acharyas), who provide protection. The dances and the jesting of the Atsaras are believed to entrance evil forces and prevent them from causing harm during Tshechus. Modern Atsaras also perform short skits to disseminate health and social awareness messages. To farmers, the Tshechu is also seen as a break from farm life. It’s an occasion to celebrate, receive blessings and pray for health and happiness.

See our departure for Thimphu Tshechu in Sikkim & Bhutan